Robert Downey Jr.’s film career is like something out of a movie itself. He started out in small roles in the ’80s, slowly making a name for himself and then becoming one of the most fascinating young actors around. His career was sidelined by drug addiction and legal issues before he made one of Hollywood’s most dramatic comebacks, becoming one of the biggest stars in the business.

Robert Downey Jr. is the comeback king of Hollywood. Most know him from the MCU as Iron Man, but he’s been in several other acclaimed films and these are his Top 10 Movies :

Spoiler alert: the gang fails in Infinity War, and Thanos does wipe out half of humanity with the help of the Infinity stones. That’s why, when the remaining heroes learn that there might be a way to reverse time, they jump at the opportunity.

Downey reprises his role as Iron Man for one final time, helping close out an era in superhero history.

The 2019 film grossed over $2.7 billion at the box office and left fans more than content.

Civil War was also responsible for introducing Tom Holland’s Spider-Man to the MCU. Holland proved to be perfect for the role and he had amazing chemistry with Downey Jr.. This led to Tony Stark playing a small but pivotal part in Spider-Man’s first solo film in the MCU.

The movie explores Peter Parker’s quest to become an Avenger and get Tony’s respect. The movie was a hilarious and exciting high school adventure with Holland continuing to impress in the lead role. Downey Jr. was ideal in the mentor role and helped create one of the most heart-warming relationships in the MCU.

Though Downey Jr. is obviously a world-class leading man, he is also fantastic as part of an ensemble. In Good Night, and Good Luck., he joined an all-star cast that included George Clooney, David Strathairn, Jeff Daniels and Patricia Clarkson.

The throwback drama told the true story of journalist Edward R. Murrow (Strathairn) and his team taking on the Communist witch-hunt led by Senator Joseph McCarthy. The film is filled with great performances and an intense look at a subject that still feels relevant today.

The third installment in the Avengers series had the super gang teaming together in a giant fight against Thanos.

This new villain hopes to use the six Infinity stones in order to rearrange reality, so naturally, the heroes set out to collect them all first. They do this by splitting into teams and setting out for success.

The film’s twist ending had moviegoers begging for the follow-up film to come fast.

Before Iron Man was appearing as part of the Avengers, he was holding down his own film.

The original 2008 Iron Man film had Downey, as billionaire genius Tony Stark, being kidnapped by terrorists who hope to make him build a weapon for them. He ends up instead creating a special suit that helps him escape, and it’s not long before he uses it to fight crime and defend humanity.

Little did Downey know at the time that this film would kick off a huge series of Marvel successes.

This 2007 mystery thriller tells of a team of investigators and reporters who work together to find the true identity of the serial killer known as Zodiac. As the criminal continues to count his victims, he leaves behind messages that the gang is eager to figure out.

The film’s biggest stars include Jake Gyllenhaal and Mark Ruffalo. Robert Downey Jr. Downey played one of the reporters, the real-life Paul Avery.

The film finished on many critics’ end-of-year top-ten lists.

In 1993, Downey took on a role in a comedy-drama film inspired by the writing of American poet and short story creator, Raymond Carver.

The film weaved together the stories of 22 different characters, with many of the plots relating back to infidelity and death. In addition to Downey, the ensemble cast included names like Julianne Moore, Frances McDormand, Matthew Modine, and Anne Archer among many others.

Though its box office score was modest, the film received a load of admiration who found the story to be funny, emotional, and compelling overall. 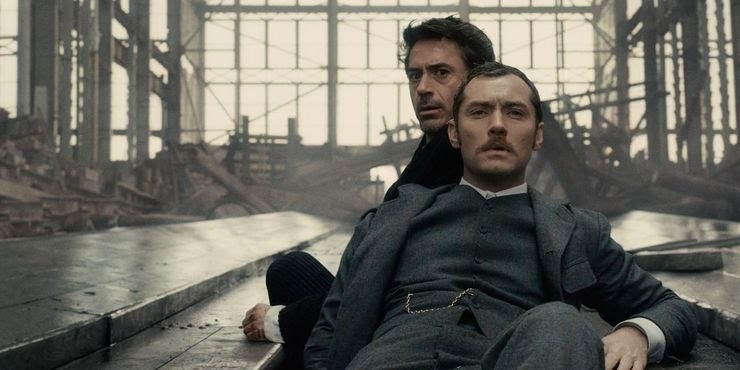 Downey’s original 2009 Sherlock Holmes film involves a series of murders that continued to occur throughout London. With help from Watson, Holmes sets out to locate the terrorizing Lord Blackwood. The pair soon finds out, however, that their case isn’t ordinary when dark magic and strange technologies weave into the mystery.

This 1992 comedy-drama recounts the life of comedian Charlie Chaplin, with Downey starring as the man himself.

Though the story begins by focusing on Chaplin’s early days in south London, he eventually begins a successful silent movie career in America. Though Chaplin faces many wins, they are shadowed by his difficult relationships and eventual exile from the United States.

Downey received an Academy Award nomination for Best Actor thanks to his strong performance. The high production and overall interest were also praised, despite the script taking a handful of artistic liberties.

After the future of the Avengers comes into question, Captain America (Chris Evans) and Iron Man (Robert Downey Jr.) split into teams, having different opinions on the government’s defense of the people. This leads the other Avengers to join both sides of the debate.

The blockbuster was filled with both big action and interesting themes, leading it to become both a critical and commercial success.

This is our Top 10 Robert Downey Jr.’s Movies, if any of your favourite movies by him missed the list,  You can add them by dropping your suggestion on the COMMENT BOX.